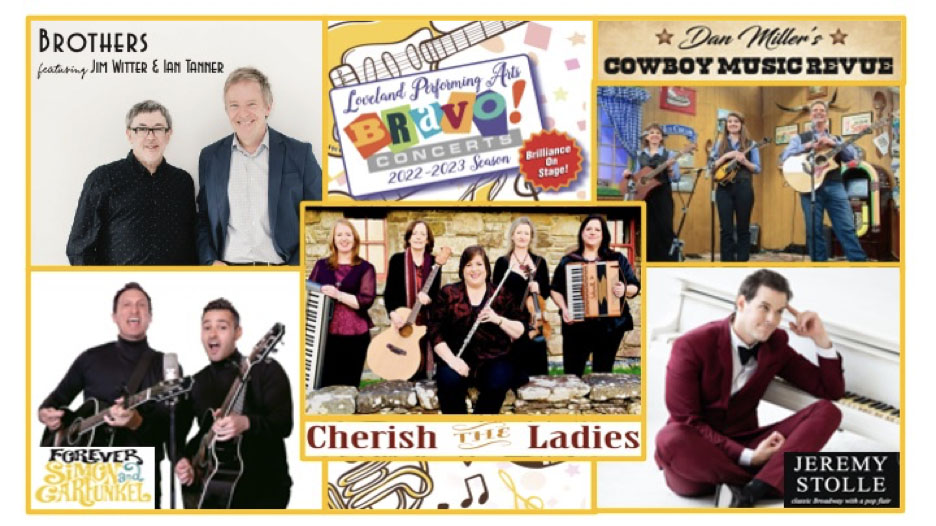 The 2022-23 BRAVO! Concert season features five great live performances. These musical concerts start in the Fall with Brothers – a tribute to musical brothers, followed by Cherish The Ladies – an Irish Folk ensemble. The live music continues in 2023 with The Dan Miller Cowboy Revue – classic Country, followed by Forever Simon – tribute to Simon & Garfunkel, and finally concludes with Jeremy Stolle – Broadway classics with a Pop twist.

THE BROTHERS show features the hits of “musical brothers” like Lennon & McCartney, Hall & Oates, The Righteous Brothers, The Beach Boys and many others. This talented duo features Jim Witter on vocals, piano and guitar and Ian Tanner on bass, guitar, and vocals. Terrific visuals complement the show, bringing you back to the era of these “Brothers”. PERFORMANCE TIME: 7:00PM

CHERISH THE LADIES is an all-female ensemble featuring flute/ penny whistle, guitar, violin, keyboard & accordion. It is led by Joanie Madden, Ireland’s flute & whistle champion and is honored with NEA’s National Heritage Fellowship, our nation’s highest honor for traditional & folk artists. They have played around the world, including the White House, the Olympics, and all of the biggest venues, delighting the audience with a spectacular blend of virtuoso instrumental talents, beautiful vocals, captivating arrangements, and stunning step dancing. PERFORMANCE TIME: 3:00PM

DAN MILLER and his COWBOY MUSIC REVUE have been entertaining audiences around the world for 17 years with their first-class musicianship and family-friendly production. Coming from their home range of Cody, WY, Dan will be joined by his daughter, Hannah, on fiddle and mandolin, and business manager, Wendy Corr, on bass and vocals. Their musical style ranges from cowboy & Americana, to a bit of bluegrass and gospel. PERFORMANCE TIME: 7:00PM

FOREVER SIMON & GARFUNKEL stars award-winning singer-songwriters Sean Altman and Jack Skuller, celebrating the best- selling duo in rock’n’roll history. With humor, soaring energy, charm, and laser-precise harmony, they lead the audience on a journey through Paul Simon and Art Garfunkel’s teenage roots, their early success as a groovy folk act, their global dominance as hit-makers, and the best of Paul Simon’s solo career. All this plus a set of songs by the Everly Brothers! PERFORMANCE TIME: 7:00PM

JEREMY STOLLE is a recording artist, concert singer and
currently one of the Phantoms on Broadway. He also performs with orchestras, including Indianapolis Symphony, Springfield Symphony, and with Music Theater Wichita. He has starred in many shows, including Disney’s Hunchback of Notre Dame, The Music Man, Carousel, Jekyll & Hyde, and Brigadoon. He performs Classic Broadway with a pop flair and is accompanied by a pianist and female vocalist. PERFORMANCE TIME: 7:00PM

LPA’s Mission is to bring high-quality, nationally touring acts to our Loveland and Northern Colorado communities at an affordable price. By purchasing season tickets, you’ll have access to five live musical performances at one low price plus you’ll support our non-profit, all-volunteer organization. Individual show tickets are also available at the door and online. And, if you choose to donate to our 501c non-profit, you may be able to get a tax deduction.